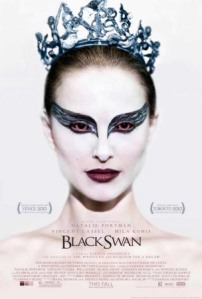 All I hoped for when I bought a ticket to this film was that it wasn’t going to turn me off the ballet ‘Swan Lake’ for the rest of my life. Fortunately, it didn’t.

When I left the cinema after the screening, I had that feeling of stepping into another world, much different from the one I’d just been inhabiting. There are few films that create that sort of atmosphere. (The last one I can think of was ‘Eastern Promises’, coincidentally also a Cassel film.)

I should preface the rest of this review by stating that I am not a dancer, nor ever have been. Thus I can’t speak for the technical abilities of any of the cast. However, their skills were convincing enough that I was not drawn out by any glaring errors. (I’d read various reviews that remark that ‘real dancers’ should have been used in the main parts.) As Nina, Natalie Portman had the perfect poise and delicate presence to be the white swan, Odette. Her counterpart, Lily (played by Mila Kunis) could have been Odile.

The film starts conservatively; the audience wonders what the fuss is all about. Once Nina begins to break under pressure, it becomes unclear where the real world ends and her visions begin. My mother and I, post viewing, compared Nina and her mother to the Stephen King novel (and 70s film) ‘Carrie’, as Nina’s mother starts out seeming normal, if slightly overly concerned about her daughter’s career, but becomes an overpowering presence. Would Nina have managed to sustain sanity if her mother hadn’t been the way she was?

I don’t want to give away too much of the film.

Vincent Cassel was well cast as the ballet company’s director, Thomas Leroy; a pushy and somewhat sleazy man. I do think his talent has been somewhat overlooked by Hollywood. Winona Ryder (whom I barely recognized) was the company’s retiring prima ballerina, Beth, and Barbara Hershey was excellent as Nina’s overbearing mother, Erica.

I don’t think this movie is for everyone. If you’re a sensitive viewer, you’d be better off with something less gory. It is, however, one of the more interesting movies I’ve seen in the past year, and for that alone, I would recommend it.