This post is completely off-topic from my usual sort of thing, but I just have to post it. Those of you who know me on Facebook or Twitter have heard the story, but I’m going to tell it one more time. Maybe posting it on my blog will make it seem just a bit more real, and not some sort of daydream.

Last Saturday, I attended the AGM and workshops for my local RWA chapter (CaRWA). During one of the workshops, my friend Julie called. She was at the Calgary Comic & Entertainment Expo. Of course, I didn’t want to answer, since that would be rude. However, my curiosity got the better of me and when my phone flashed to voicemail, I couldn’t resist checking. Here is what it said: 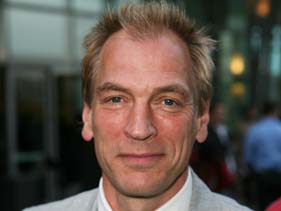 Hello Alyssa, this is Julian Sands. I’ve just signed a poster to you and I’ve put a couple of kisses. If you’d been here I might have put a couple more. Anyway, you have a great weekend, I know you’re at a writer’s conference. Bye-bye.

If I hadn’t been sitting down, I might have fallen over in surprise.

After some gasping, hand-over-mouth squeaks and several other noises, I listened to it again, and promptly said, “Oh. My God.”

When Sunday morning came around, I knew exactly where I needed to be: at the Calgary Comic & Entertainment Expo, with Julie. We met up around 10:30am, and once I’d paid for my pass, she took me straight over to the autograph section, where Julian was hanging out with his handler at a table with no line.

Don’t ask me to repeat verbatim what was said — beyond a few words, it’s a bit vague. Put it down to shock and awe. I do remember that he said hello, and something like ‘it’s about time you got here’, as he’d recognized Julie and put two-and-two together. We shook hands, and he kept hold of my hand and kissed it. I said something about having been a fan of his for years, and that I’d first seen him in Tale of a Vampire. And then I said that I’d come to collect two more kisses since he’d mentioned them when he called. He obliged and put two more X’s on the poster he’d autographed the day before. He asked me about my writing, and I pitched my book to him (and poorly, I’m afraid, given my aforementioned shock and awe), and told him about New York. He wished me good luck. Around that time his handler was doing the ‘move on’ type noises, so we moved on.

I spent the next little while in line for a couple of other actors (Jonathan Frakes and Elvira), but I was shaking so much I could hardly send any text messages or tweets. 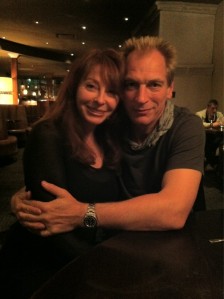 We checked out Julian’s spotlight panel at 3pm, asked a couple of questions, and listened to him talk about some of his experiences. Julie asked him about his Stargate role, and I asked him about what novels he’d like to see made into film. (He’s in the Daniel Craig version of Girl With A Dragon Tattoo, btw.) At 4pm I had a voucher for a photo-op, so I went and stood in line. I’m glad I got it, since it’s really solid proof that yes, I really did meet Julian Sands.

I’m so glad I went; he’s such a sweet man. I rarely ever make a point of meeting actors or musicians that I really like, on the off-chance that they’ll end up being jerks and I’ll dislike them, but Julian was pure class. He really made my weekend. (And I must say that he’d do rather well as a movie version of one of the characters in THE PARIS GAME….)